PAIN HAS NO PICTURE

brandfilme.org is working on a new 3-part film essay and a series of interviews with the support of Filmlabor Düsseldorf 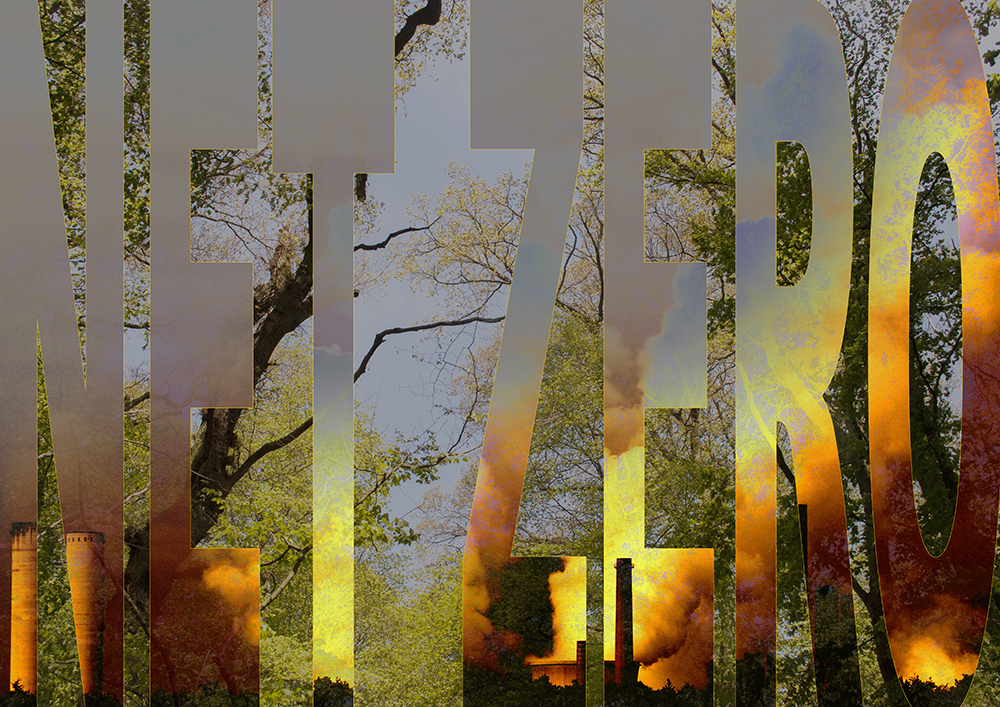 1.Tracing in an Unknown Terrain: Working On Racism

2. Net Zero: This House Will Burn - On Nature and Capitalism

The concept for this film series was originally born out of an inerest in getting to the bottom of the contradictions within the various intertwined areas of "saving the earth", the envisaged solutions and sham solutions, which, despite the narrative of a fairer and greener future, seem to become increasingly entangled in the global work of destruction. As the rapid work of degradation and extraction of the multinational corporations takes its course and at the same time people in every corner of the world are fighting for animal liberation, forests, trees, waters, villages, natural areas and ecosystems, for LGBTIQ rights, for working conditions and jobs, for housing, living space and against racism, the pervasive reality of natural disasters and crimes against life and body is becoming more and more threatening.

The discourse of racism runs its course and yet black people and People of Colour continue to be killed, the ocean remains a grave for fleeing people, migrants end up in the networks of merciless human trafficking or in the prisons and torture chambers of European or non-European security systems.

In "Pain has no Picture" I follow the traces of basic social conditions underlying this ambivalence of modernity and its hopeless socio-ecological development. It seems to me that it is especially Anti-Blackness, which is a highly relevant, but from a white perspective hardly investigated form of an effective division of the world into non-black and black, on whose track I hope to get to the bottom of these pressing questions of the destruction of the earth. I explore the existence of basic assumptions,  that act as driving forces and repeatedly condemn actual life and suffering, the exclusion of entire populations from access to resources and from the securing of existential needs into a structural invisibility.

Interviews with scientists, historians, feminists, artists, philosophers and actors of black groups in the FRG examine the origins - shaped out of the European area - of violent and domineering separation and division of forms of existence, of formerly related life systems and societies. In the conversations, I ask about historical paths of continuing and increasingly branching-out antagonisms of visibility and "disappearing behind the mirrors of a white-written knowledge and history culture.

Is it the pain of separation and powerlessness that arose and continues to arise 24 hours a day when people were and are deported as bodies of labor to create progress and wealth under coercion? Can pain be understood as an elementary category and historical substance of existence among living beings in the living world, even though it is not a societal instance and has been more or less banned from the historical narrative?

Is this the point where division and separation can be understood as a basic societal and interpersonal relationship that enables works of destruction without taking their effects into account - as is the case with the externalization of social and ecological damage in the capitalist economy? Is it a socially generated basic ratio that is decisive for living beings under the supremacy of man and reproduces itself in numerous forms of social coexistence?

Is the pain of others not only philosophically seen also one's own? And if so, is it then possible that in the midst of our emancipatory efforts we nevertheless reproduce structures and norms of division and exclusion?

I am far from having answered these questions for myself, but it is worth a try in these cinematic essays to ask my interview partners, who I can introduce here gradually. 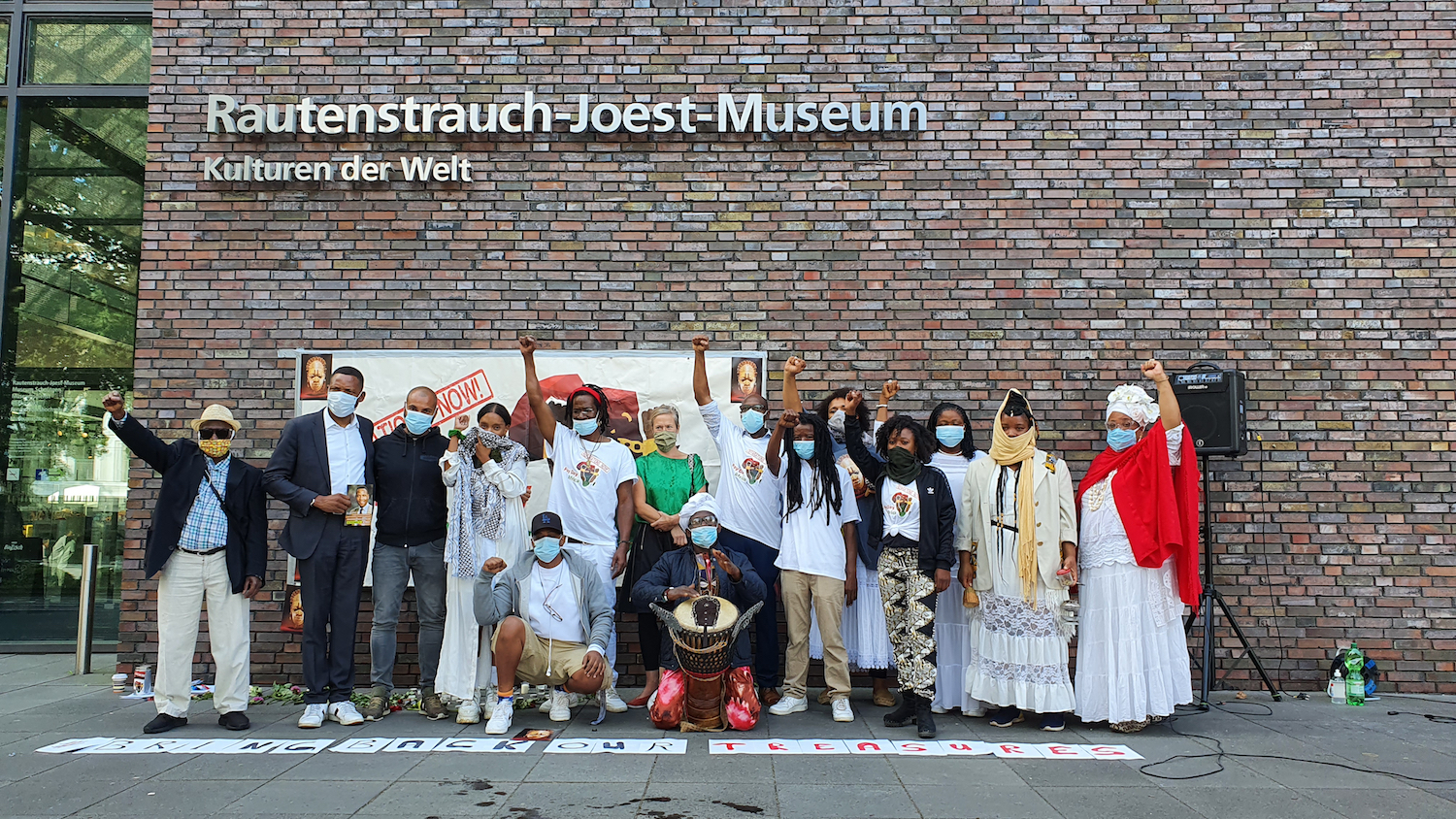 "Bring Back Our Treasures" Demonstration of the group Pay Day Africa International in front of the Rautenstrauch-Joest-Museum in Cologne 12.9.2020 Photo:©Susanne Fasbender

1.Tracing in an Unknown Terrain: Working On Racism

While I dealt with racist conditions in connection with resource extraction and economic appropriation in the global South, the issue of racialization and blackness came closer in the form of the current BLM developments and it grew in my life. All the more the question of the division of the world into black and non-black - a definition that the philosopher Frank. B. Wilderon III suggests, traditionally referred to as black and white - came to the fore for me and became present in a way that was at once personal, difficult, violent and emotional, because as a non-black person I suddenly became involved. Because I realize that in an acutely perceived way I am part of the separation of the world into black and non-black. The topic becomes a key issue and perhaps holds a liberating potential, as it appears to me to touch the substance of our common social life.

Inspired by the excellent educational work of the Africanist Serge Palasie, I would like to approach in part 1 the series of the violent deportation of 60 million Africans in the transatlantic trade area, of which 15 million Africans survived the deportation in order to build up the rich world as bodies of labor. At the same time as these 60 million people of Africa were deprived of their subject existence and systematically turned into tradable commodities, The Enlightenment established the celebrated humanist values of European society: 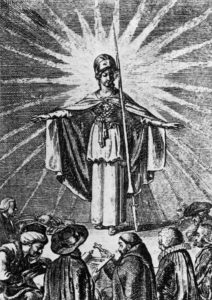 Minerva, goddess of wisdom, as a symbol of tolerance, 1791, public domain, source: Wikipedia

Reason, human rights, freedom, tolerance, etc., which from now on were to be valid as categories of humanism. Around the ruling classes and their magnificent palaces built through enslavement and forced labor, these values were mirrored in a visibility behind which the existence and pain of the enslaved disappeared from perception. This is certainly the most striking form of the contradiction between visibility and disappearance, for which reason I ask about the extent to which they are fixed. Is there any linkage to today's questions of racism and how do they manifest themselves? What can I learn from Black Feminism?  How did the concept of whiteness originate and how do I examine it? Is there a potential in studying racism in terms of finding out about the above-mentioned basic conditions and facing the "destruction of the earth"? 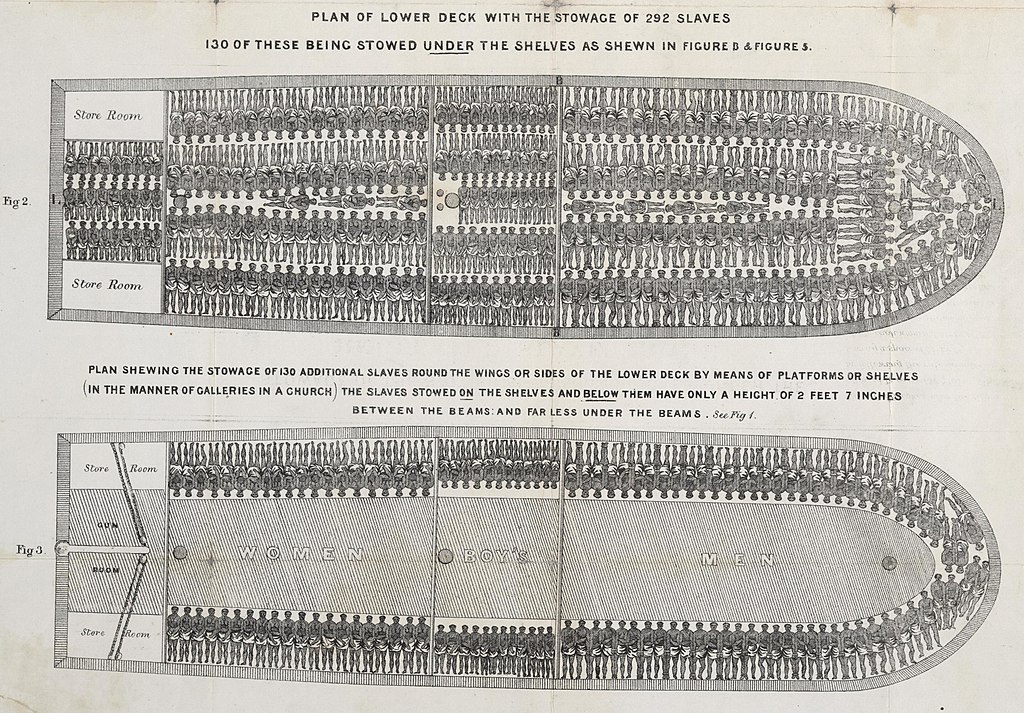 2. Net Zero: This House Will Burn - On Nature and Capitalism

Today we are witnessing the implementation of a green capitalism that promises the prospect of a "green future" as a " more just world" and in its narrative corresponds to the call for climate justice. This promise has established itself as a projection screen for a hope that threatens to take the place of real change and to become exhausted in it.

Seuri reports about the daily walks with his family's animals to watering places, which became necessary due to the drought in the Massai areas in Tanzania caused by climate change. In addition, their areas are closed to the Massai in order to "protect" them for tourism. So the fighting and suffering is taking place on many levels. Photo: ©Seuri

Green capitalism can make use of almost all the concepts of environmental movements, although, in order to develop, it continues to produce a limitless demand for the extraction of raw materials, the enclosure of territories and the displacement of populations.

„Net Zero: This House Will Burn" examines more closely the practices, plans and realizations of a green capitalism in the context of e.g. the Green New Deal. What exactly is it about and what is actually supposed to happen?  In the previous practice of Green Solutions, which have been realized since the beginning of the 1990s, a racist basic relationship in the planning of CO2-reducing development projects in the Global South has been repeatedly criticized. How can this contradiction be explained and made visible?

It is precisely here, in the complexity of financial engineering approaches, the orientation of necessary problem solving towards processes of commodification and logics of monetary abstraction, that the contradiction between visibility and disappearance is particularly pronounced. 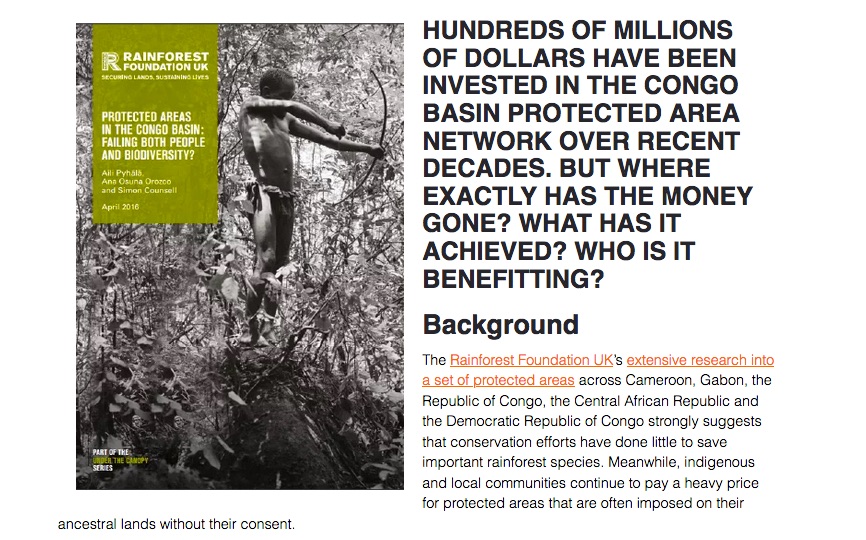 How do groups fighting climate change and extractivism position themselves in relation to it? How willing are they to compromise and what does this mean for their original goals?

I would like to consider the idea of human domination of all other creatures as a fundamental question of "separation and division" in the social relationship with nature and illustrate this with a journey through the last 80 years of environmental history. How, for example, the idea of putting the abilities of plants into value as services for capital flows - a project I have been working on since the BRAND(fire) film trilogy - is part of this journey. 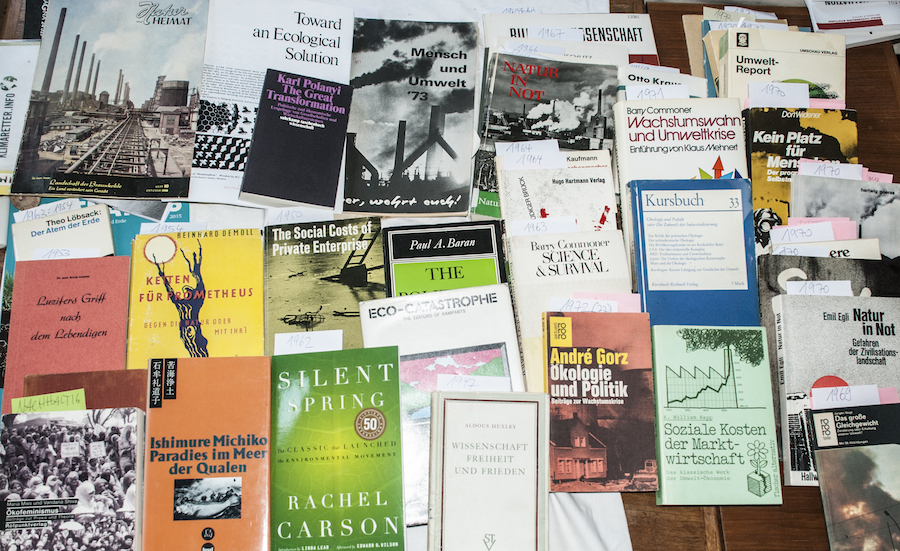 Essayistically and associatively, the film follows the various aspects and concepts surrounding the destruction of nature and the capitalist persistence of these practices. 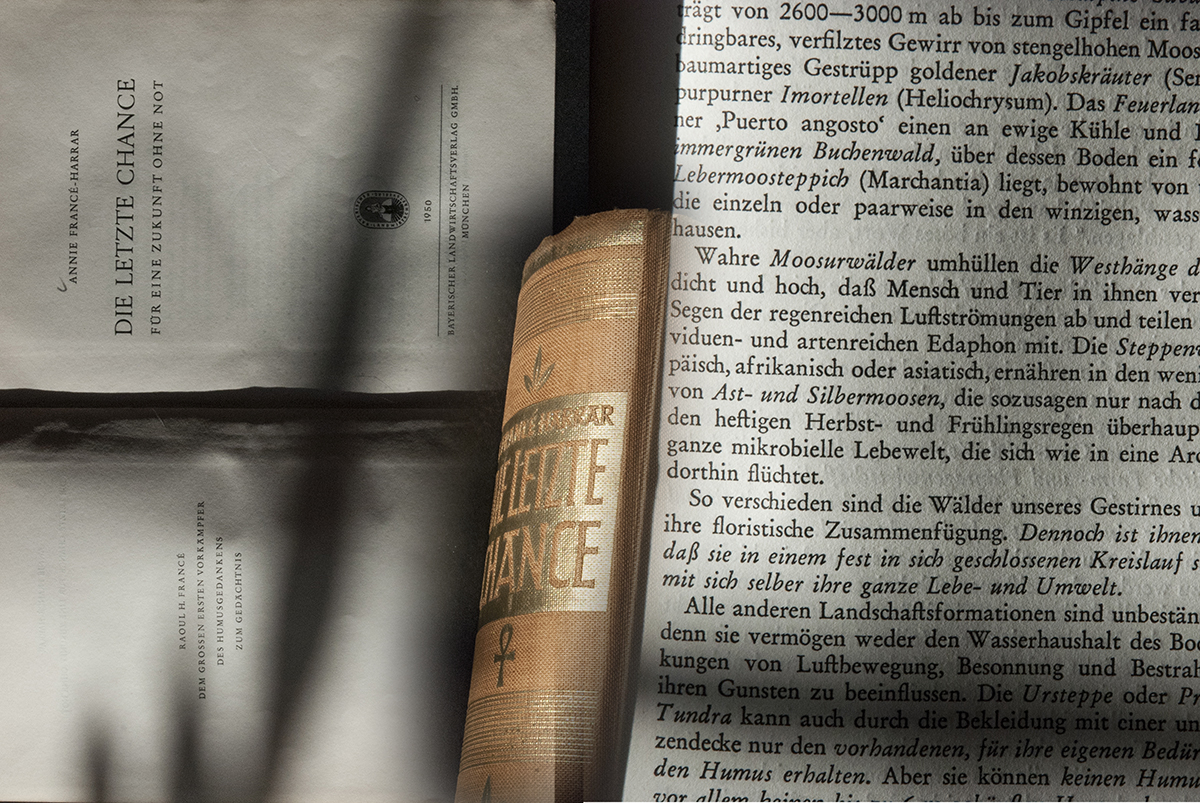 "The last chance for a life without need", by Annie Francé Harrar from 1950. 700 pages about humus and the forest soils investigated worldwide by her and her husband Raoul Francé and their destruction by man was praised by Albert Einstein as one of the most important books of the 20th century, remained unknown. Photo: Susanne Fasbender, further use is permitted under indication of name.

First thoughts: What to do? How do we come together? How do we overcome social lines of division, social determinations also with regard to the human-animal relationship? I would like to talk with interviewees about how the contradictions between visibility and disappearance dealt with in this film series manifest themselves in multiple ramifications of socio-ecological conditions that we humans often don't want to face in white-centered society. Established in the social consciousness in a "comfortable" manner, they unfold their power even into the structures of our own social movements, remain buried under a too quick identification with "the seemingly right" and not wrong. Could perhaps even the morality of the supposedly better person prove to be an obstacle on the way to the goal of liberation, for example, in that we imagine ourselves to be on the right side in comparison with others, while we are primarily concerned with our recognition as a person as well as their social and societal status?   More on the 3rd part of the series later.

Because, what I notice in the concept of questions for the films now forgotten: Could we perhaps even go so far as to ask whether moral claims are a historically essential factor in legitimizing the always visible side against the invisible? Therefore, I would like to talk with the interview partners about how the contradictions between visibility and disappearance, which are to be dealt with in this film series, manifest themselves in multiple ramifications of social conditions, which we humans, however, do not want to face in the white-dominated society. Anchored in the social consciousness in a "comfortable" way, they unfold their effectiveness even into the structures of our own social movements, remaining buried under an overly quick identification with "the apparently right" and non-wrong. Could even the morals of the presumed better person turn out to be an obstacle on the way to the goal of liberation, for instance by putting ourselves on the right side in comparison with others, while we are primarily concerned with our recognition as persons as well as their social and societal status?